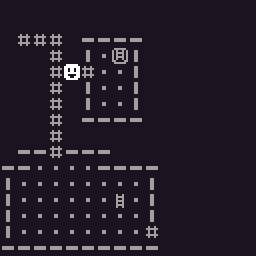 On a recent game night, glip and I stumbled upon bitsy — a tiny game maker for “games where you can walk around and talk to people and be somewhere.” It’s enough of a genre to have become a top tag on itch, so we flicked through a couple games.

What we found were tiny windows into numerous little worlds, ill-defined yet crisply rendered in chunky two-colored pixels. Indeed, all you can do is walk around and talk to people and be somewhere, but the somewheres are strangely captivating. My favorite was the last days of our castle, with a day on the town in a close second (though it cheated and extended the engine a bit), but there are several hundred of these tiny windows available. Just single, short, minimal, interactive glimpses of an idea.

I’ve been wanting to do more of that, so I gave it a shot today. The result is Roguelike Simulator, a game that condenses the NetHack experience into about ninety seconds.

Constraints breed creativity, and bitsy is practically made of constraints — the only place you can even make any decisions at all is within dialogue trees. There are only three ways to alter the world: the player can step on an ending tile to end the game, step on an exit tile to instantly teleport to a tile on another map (or not), or pick up an item. That’s it. You can’t even implement keys; the best you can do is make an annoying maze of identical rooms, then have an NPC tell you the solution.

In retrospect, a roguelike — a genre practically defined by its randomness — may have been a poor choice.

I had a lot of fun faking it, though, and it worked well enough to fool at least one person for a few minutes! Some choice hacks follow. Probably play the game a couple times before reading them?

Probably the best part was writing the text, which is all completely ridiculous. I really enjoy writing a lot of quips — which I guess is why I like Twitter — and I’m happy to see they’ve made people laugh!

I think this has been a success! It’s definitely made me more confident about making smaller things — and about taking the first idea I have and just running with it. I’m going to keep an eye out for other micro game engines to play with, too.