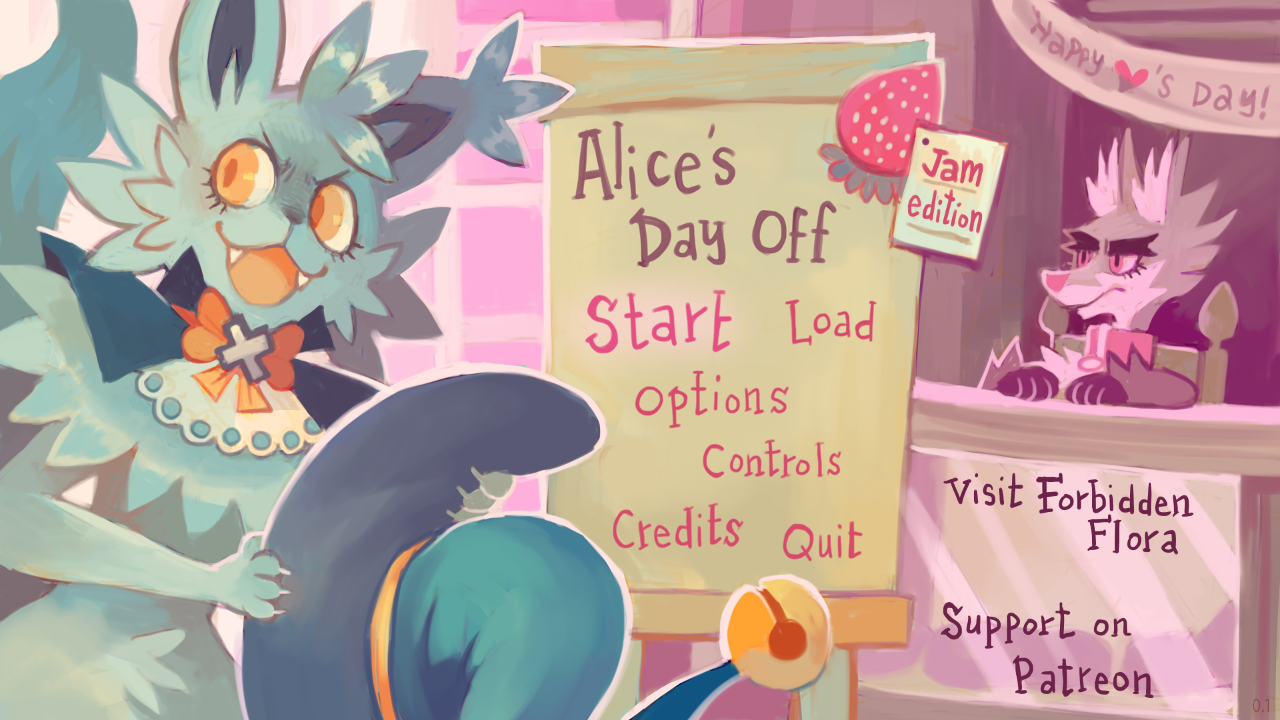 🔗 Alice’s Day Off demo on itch

Some lingering thoughts about the process itself:

Visual novels combine narrative prose with the interaction of games, but the two forces are somewhat at odds: the more interaction you add, the more prose you have to write, with the worst case being a combinatoric explosion (which won’t even be appreciated by players who run through only once). And there’s a subtle tension between the design of those decisions and replay value, which… I maybe ought to go on about some other time.

Anyway, this is all really a distilled form of the problem of offering narrative choice in games in general, which I find fascinating, so I really wanted to play around with it. I have a few ideas for experimenting with what player choice even looks like in a visual novel, and we have thoughts about narrative variety at all levels so there’s something to appreciate no matter how much or little you replay the game.

Alas! We had to drastically cut down what we wanted to do due to time constraints, hence calling this a “demo”; it’s a sample of ten (mostly linear) routes. It’s good stuff, I’m happy with how it came out, and there’s a pretty decent chunk of it — I think a straight read in one sitting takes about an hour — but I naturally compare it to everything I know isn’t there.

This was my first time using Ren’Py, and it defied my assumptions so utterly that I have to go write a separate post about it now. I think it came out pretty well, considering I’d never touched the engine before three weeks ago.

The touch I like the most is the custom title screen, seen above. I think it’s fairly important to hide obvious traces of the engine you’re using, when feasible; otherwise the end result is covered in someone else’s (generic) fingerprints, not yours. So we added a splash, added a title screen, and completely changed the in-game interface. (The in-game menu is basically the same, but it’s general-purpose enough that I’m not sure it’s really worth changing. Maybe?)

Part of the point of this exercise was to force me to actually sit down and write a story, an activity I often attempt to do and then awkwardly shy away from. It feels like pushing against a river of molasses: it takes me so long just to get started at all, and if I stumble even slightly, I lose my momentum completely and have to start all over. It’s my ADD final boss.

Suffice to say, I spent a good chunk of the month mostly not-writing, which was frustrating and didn’t get us very far. It wasn’t until the final week that I felt like I really hit my stride and started churning out big chunks of prose at a time. I don’t have any inspirational tale about how this happened; I just kept trying to do it and failing to do it until I finally did it. Hopefully it’ll be easier to get into from now on!

I did half the writing, and it’s endlessly hilarious to me that my co-writer and I both looked at each other’s prose and came away thinking “damn, I need to do it more like that!” Probably a good sign.

That’s all I’ve got; back to work!