Many moons ago, I started a ridiculous quest to solve every Project Euler problem, in order, with a different programming language. I called it “heteroglot“.

Partway through that, I gave myself the additional unwritten rule that the next language would be selected by polling the nearest group of nerds. This has resulted in math problems solved in such wildly inappropriate languages as vimscript, MUMPS, LOLcode, and XSLT.

It’s been a while since I did one of these, but I still remember that the next language I’m stuck using is COBOL. I don’t know who suggested it, but I hope he chokes on a rake. ♥ 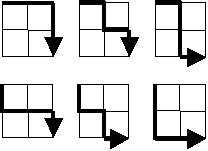 Starting in the top left corner of a 2×2 grid, there are 6 routes (without backtracking) to the bottom right corner.

How many routes are there through a 20×20 grid?

There are two approaches to solving this: actually count every path, or invent a formula. I’d like to spend as little time with COBOL as possible today, so let’s try the latter approach.

So, find a pattern.

Now, wait. Before considering 3×3, bear in mind: nothing about this problem requires that the grid be square. Think of some other small sizes:

Has a pattern emerged?

This is Pascal’s Triangle.

So in the table, any given number is the sum of the number immediately to its left and immediately above it: the two solutions for the same-size grid with one fewer row or one fewer column. That’s exactly how Pascal’s Triangle is created.

In the nth row of the triangle, the number at offset r (both counting from zero) is given by nCr(n, r). All I need now is to convert a grid size a×b to a row in the triangle. Each triangle row is a diagonal of the original table, so you get the row number from a + b, and the offset is either a or b. The answer is then nCr(a + b, a).

From here I could just figure it out with a calculator, but that’s cheating. Time to find a COBOL compiler.

I’m on Arch, and the first thing I found was OpenCOBOL, on the AUR, so I’m installing this bad boy. Your results may vary, if for some reason you’re following along.

Now I need to learn some COBOL. OpenCOBOL’s site helpfully links this OpenCOBOL Programmer’s Guide. Let’s see what I have here.

As more and more people became at least informed about programming if not downright skilled, the syntax of COBOL became one of the reasons the ivory-tower types wanted to see it eradicated.

My archaeological adventure is off to a fantastic start.

Right, well, step two: what the hell does a program look like? I am dimly aware that COBOL has a lot of wordy setup and DIVISIONs of code or data or something. Section 2 starts to explain this setup. The only required part of a COBOL program appears to be PROGRAM-ID. {program-name}, but that won’t actually do anything. So I think I’ll actually need something more like this:

That last part isn’t actually necessary if I’m only building one file, but I like the feeling of talking to a computer with no prepositions or particles. Reminds me a little of Robotic.

At this point I like to stick my no-op program in a file and compile it, just to make sure I have something valid (and also to figure out how to compile). Here I discover several things.

I’m having flashbacks to MUMPS already.

Let’s continue reading. In §1.5, “Source Program Format”, it is revealed that the compiler can run in two modes: fixed (the default) and free. Fixed mode uses “traditional” 80-column formatting. This rings some faint bells: COBOL is all about the columns. What column does code need to start in? Fuck if I know. I can’t find anywhere in the documentation for this compiler that actually explains how fixed mode works.

Back to the website, and I find that the online User Manual is not very thorough but does contain an example hello world program, which explicitly states that program lines must start in column 8.

And, indeed, indenting everything by 7 spaces makes vim happy. Now I have:

Haha, and people complain that Python has significant whitespace. You assholes. Guess what I’m linking you next time I hear that.

At last, time to try running this thing. The hello world program comes with super simple instructions for that, too.

First is the seed data, which here is just the size of the grid: 20×20. I’m gonna go out on a limb here and guess that data goes in the DATA DIVISION. This handy programmer guide has a page-sized diagram of the syntax for defining data and many more pages of the clusterfuck that is record syntax, but luckily there’s a much simpler way to define constants:

The 78 is a “level”, an ancient incantation used to specify just how deep in the hierarchy a datum is. In this case 78 happens to be a special level used only for constants.

Before trying to run this again, it’d be helpful to print out the constants and make sure I’ve actually defined them correctly. This is done with DISPLAY. (The same statement, inexplicably, also inspects command-like arguments and gets/sets environment variables. What.)

The UPON CONSOLE is entirely optional but it looks like I’m hacking a mainframe so I’m including it anyway.

And, whoops, this totally doesn’t work. Unsurprisingly, the PROCEDURE DIVISION needs code to be in… procedures. I had to give up and just look at the same programs here, but the short version is, do this:

Compile, run, and get 20 twice. Off to a fabulous start.

A flip through the list of statements finds me PERFORM, which both calls procedures and acts like a loop. I might as well make this a real program, so let’s do both and write a real function. Sorry, procedure.

I want to implement nCr(). I need a numerator and denominator accumulator, a loop of r times, and some multiplication. Seems easy enough.

The first stumbling block is, er, creating variables. There’s nothing to do that. They all go in the DATA DIVISION. All of them. In this case I want a LOCAL-STORAGE section, which is re-initialized for every procedure—that means it should act like a local.

I want a loop variable, a numerator, a denominator, and two arguments.

It is at this point that I begin to realize that COBOL procedures do not take arguments or have return values. Everything appears to be done with globals.

There’s a CALL statement, but it calls subprograms—that is, a whole other IDENTIFICATION DIVISION and everything. And even that uses globals. Also it thinks BY VALUE for passing means to pass a pointer address, and passing literals BY REFERENCE allows the callee to mutate that literal anywhere else it appears in the program, and various other bizarre semantics.

Let’s, um, just go with the globals. Some fumbling produces:

Anyway, the idea here would be that you store the arguments into the n and r globals, PERFORM this procedure or paragraph or whatever, then get your result out of the n-choose-r-result global. The globals are in the DATA DIVISION like this:

(UNSIGNED-LONG is a 64-bit unsigned machine integer, the biggest machine number COBOL appears to have.)

Well. I could set out to see if COBOL does bignums or if the whole PIC thing supports arbitrary precision, but I’m scared to think what I might find. Instead, let’s do some more math.

Consider that nCr(n, r) for any nonnegative integers n and r is always, itself, an integer. (This isn’t too hard to prove informally, but just accepting it is enough.) So I know:

I can take advantage of this to minimize the intermediate results without ever worrying about floating-point. (Does COBOL support floating-point? Christ, I don’t want to know.)

Er… eh, close enough. And the internets suggest it may not really be possible to avoid the leading zeroes.

Throw it at Euler and, indeed, this is correct. Phew. Done! The final program is 015.cob.

COBOL is even more of a lumbering beast than I’d imagined; everything is global, “procedures” are barely a level above goto, and the bare metal shows through in crazy places like the possibility of changing the value of a literal (what).

On the other hand, I can see how the design maps pretty naturally to bare metal, and the alternatives at the time were Fortran and ALGOL. Ada didn’t exist. C didn’t exist. Hell, B didn’t exist. The original Lisp paper had only just been published! In that light, COBOL is a reasonably impressive piece of work, which I will never use again if I can possibly avoid it.

One thing that slightly bewilders me is how COBOL came to both have so many ways to do the same thing, yet also so heavily reuse some keywords. DISPLAY both prints stuff out and messes with environment variables. PERFORM both calls a procedure and performs a loop. Or calls a procedure in a loop. And it has some pretty complex syntax for determining when the loop ends and how many times it runs and whether there’s an incrementor. It even has syntax explicitly designed for doing nested loops without actually having to nest loops. What?

I can’t resist. This programmer’s guide is amazing. I know COBOL is ass-old, but this guide was published in 2009!

All CPUs are capable of “understanding” big-endian format, which makes it the “most-compatible” form of binary storage across computer systems.

Some CPUs – such as the Intel/AMD i386/x64 architecture processors such as those used in most Windows PCs – prefer to process binary data stored in a little-endian format. Since that format is more efficient on those systems, it is referred to as the “native” binary format.

On working with libraries.

Today’s current programming languages have a statement (usually, this statement is named “include” or “#include”) that performs this same function. What makes the COBOL copybook feature different than the “include” facility in current languages, however, is the fact that the COBOL COPY statement can edit the imported source code as it is being copied. This capability enables copybook libraries extremely valuable to making code reusable.

A comma character (“,”) or a semicolon (“;”) may be inserted into an OpenCOBOL program to improve readability at any spot where white space would be legal (except, of course, within alphanumeric literals). These characters are always optional. COBOL standards require that commas be followed by at least one space, when they’re used. Many modern COBOL compilers (OpenCOBOL included) relax this rule, allowing the space to be omitted in most instances. This can cause “confusion” to the compiler if the DECIMAL POINT IS COMMA clause is used (see section 4.1.4).

On the DISPLAY statement.

The specified mnemonic-name must be CONSOLE, CRT, PRINTER or any user-defined mnemonic name associated with one of these devices within the SPECIAL-NAMES paragraph (see section 4.1.4). All such mnemonics specify the same destination – the shell (UNIX) or console (Windows) window from which the program was run.

I suppose I’m obliged to try using the first language someone suggests in the comments. You can see what’s been used so far by browsing the existing solutions. The rules therein may also be of interest.