This Friday, June 12, will be my last day at Yelp.

I don’t intend to look for another tech job.

Or another job at all.

I’m just thoroughly exhausted. I have so much I want to do, yet I’m selling half of my waking hours every weekday to someone else, for the sake of cleaning up their legacy messes. By the end of the day I’m already worn out, and now I have to squeeze in whatever I wanted to do alongside relaxing and doing chores and maintaining this fleshsack. Weekends are nice, but become a mad dash to get fifty things done, meaning none of them get done.

Working on anything complicated is nearly impossible, because I can’t get a contiguous block of time that’s bigger than half a day or so. A lot of that time is ramp-up: filling my head with what the problem is and what I was planning to do to solve it. Finally I know where I stand and what to do next, and— oops, time to go back to work again, where I have to deal with different problems just long enough to forget it all again.

Here, let me illustrate. This is how time feels: 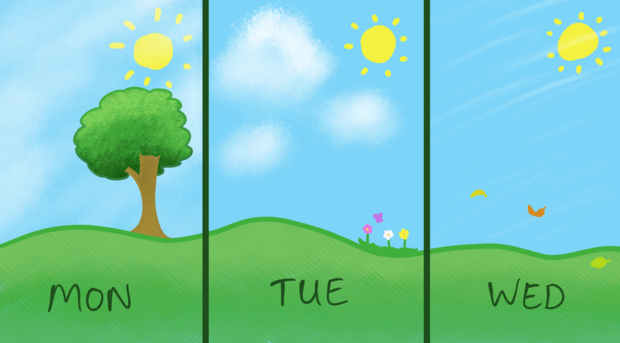 And this is how time feels with a full-time job: 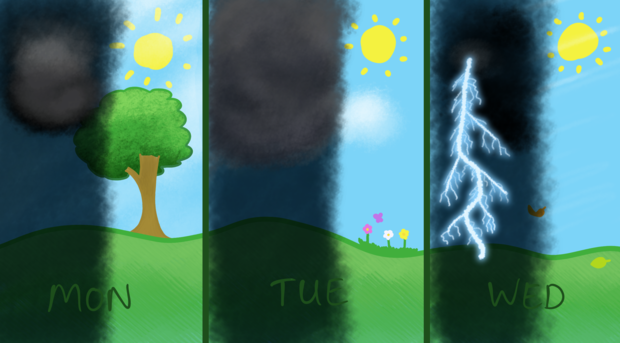 This has been weighing on me for a while, at least half a year; I spent much of April and May increasingly grumpy and withdrawn and on edge. Weekends and evenings have become even less useful, instead being clogged by a sense of paralyzing dread that I’m wasting fleeting time if I’m not doing ten amazing things at once. I’ve foregone trivial maintenance like cleaning junk off my desk because I don’t feel like I have 20 minutes to spare. I stay up hours later than I mean to, not even doing anything, just trying to put off sleeping — because the next thing I experience will be waking up and going back to work.

The breaking point actually came during a two-week vacation at the end of May. The first week was relaxing, productive, glorious. Then I passed the midpoint and saw the end of my freedom looming on the horizon. Gloom descended once more. The difference was striking, and I knew I had to stop.

It’s nothing to do with Yelp specifically. I just don’t care about Yelp’s problems, any more than I care about Uber’s problems or Yo’s problems or anyone else’s problems. They’re interesting for a while, but they’re also the same self-inflicted wounds everyone seems to deal with — why is this slow? why is this broken? how can we keep this old code limping along indefinitely without having to rewrite it? how does this thing a former employee wrote even work? They’re cute puzzles, and I can get into solving them for a while, but I don’t care about them. Because they aren’t my problems; they were just dumped in my lap, along with a canvas sack with a dollar sign on it. 💰

Even the most interesting technical things Yelp is doing probably involve reinventing something hundreds of other companies have already reinvented, because the existing things don’t work with their infrastructure or they’re written in the wrong language or they’re just kinda bad and maybe doing it from scratch will be better. And again, I stress, this is nothing about Yelp specifically; this is the nature of our stupid, backwards, fledgling industry. This is the beast we have created. We make fun of Google and Apple for just going back and forth copying each other, as though the entire proprietary world weren’t the same fucking story. Do you have any internal libraries or systems or platforms at your company? Do you think no one else has ever had the same idea and built the same thing?

I’ve only worked for two tech companies, in radically different fields. The only things they have in common are that their main products are websites with tertiary features that let you buy things. Yet both of them ended up scrambling to write their own payment platforms from scratch. What the fuck is going on?

Maybe I’m an asshole for even complaining about this. It’s not like I’m uniquely hard off here. Quite the opposite, I’ve been getting away with a really nice setup — I’ve worked remotely my whole career, from states with no income tax too.

But I can’t do this any more. It’s running me into the ground.

I’m not going anywhere. I’m going to sit at this desk and I’m going to work on whatever the hell I feel like working on.

I don’t know how to turn this into dollars yet. Hopefully I’ll figure that out.

I had stock options, and I cashed them all in last week. I net enough to pay off the mortgage, so I’m doing that, which will leave the entire household debt-free and cut our expenses drastically. There’s not a whole lot left after that (lol taxes 💸), but I can keep us afloat for a while. Mel’s Floraverse franchise is gradually gaining steam, which will help a lot too.

And I hopped on Patreon. Yelp sure thought my work was worth some cash, so hopefully other people think that too. I’ve had people ask before if they can chip in a few bucks to help keep veekun running or whatever, so that’s not without precedent.

Eventually it would be nice to make a thing that actually makes money on its own. I have two factors working against me: I like to liberally license everything I do, and I fucking hate advertising and will never put it on anything I control. So that knocks out pretty much every business plan the greatest minds of our generation (if Google’s job ads are to be believed) have come up with. I guess we’ll see if I can do any better.

Yep. Three days left until the rest of my life.