If you were not aware, I have a Patreon tier that’s essentially: I will work on whatever you want for a day, then write about it. I made the tier assuming that people would force me to do programming, e.g. actually work on veekun for once. So far it’s been about half that, and half “hey try this thing you haven’t really done before”.

Last month, @amazingant asked me to cook something, so I decided to try making pretzels, and half-seriously ended the post suggesting that he should have me make cheesecake next.

Well, guess what I had to do this month.

(Curiously, I hate cheese, and don’t much care for cream cheese, but I love cheesecake. I suspect cream cheese might be more a form of cream than a form of cheese; it even looks like an ice cream sandwich with the cookies picked off.)

Once again I turned to Alton Brown, the man I would trust with my life. There’s an entire Good Eats episode on cheesecake, culminating in this recipe. Just like last time, the recipe as written skips a lot of the more interesting details that were in the actual episode.

So I bought a stand mixer. By sheer coincidence, the cost of the stand mixer plus shipping was exactly the amount pledged for these two cooking excursions. All told, it’s kinda like someone gave me a free stand mixer, on the condition that I make two things with it and then eat them.

My lovely cat Anise helped me unpack it. 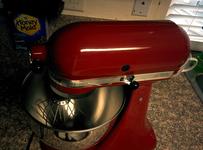 First, though, I need to make the crust. And here I must make a confession.

I committed the ultimate sin.

Godiva’s website does have a recipe for chocolate cheesecake, but… they’re not Alton Brown. Also, they seem to think a single regular-sized cheesecake yields 16 servings, so clearly they have no idea what they’re talking about.

Their recipe calls for four bars of dark chocolate, so I went and bought four bars. That’s like sixteen bucks’ worth of chocolate. No wonder Cheesecake Factory is so damn expensive.

But what do I do with the bars? Ingredients don’t just add flavor; they have physical properties which they add to the texture of the food. If I add a big pile of chocolate, do I need to take something else out? Do they contain enough milk or sugar that I should cut down on the sugar or cream I add directly?

I don’t have the foggiest idea. I’m sure there’s a Good Eats episode about this somewhere, but I’m not about to rewatch the entire series to figure this out. I’ll just, you know, wing it.

Anyway, I bring this up now because I also bought chocolate graham crackers to make the crust. Seemed appropriate.

The crust is pretty easy. You need 33 graham cracker squares, which is a really weird number. It’s kind of a weird way to count graham crackers, too, since they come in 1:2 rectangles consisting of four similarly-proportioned pieces.

Honey Maid boxes contain three packages, each of which has nine rectangles, or eighteen squares. Thus I needed two packages, minus leftover three squares that I ate as I went.

I assumed I’d be reducing them to crumbs in a food processor, but Alton Brown insists it’s better to crush them by hand and have variously-sized chunks. It’s definitely a lot more fun.

I did notice that some of the chocolate grahams had a conspicuous sprinkling of sugar on top, which I’ve never noticed on regular honey grahams. Again, is this going to affect the recipe? These are not things I know. 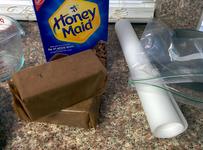 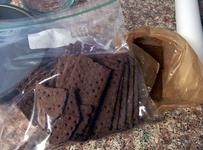 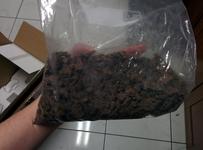 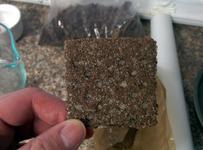 Let us take a moment to appreciate the terrible UI of my oven’s temperature knob. There are notches, and there are numbers, but the notches go between the numbers. Is 300° the notch before the label, the notch after, or the midpoint? I assume the midpoint, and so far nothing has gone terribly wrong, but I wonder every time.

Alton has a creative method for cutting parchment paper to fit a round pan: fold it radially into sixteenths, eyeball the radius of the pan, and cut the folded shard of paper. Unfold, and you have a hexadecahedron pretty close to the size of the pan.

Cutting the paper to go around the circumference was surprisingly difficult. I didn’t cut anything resembling a straight line. My paper was slightly too short and needed an extra patch. And the sides of my pan are slightly angled, so I had to add short tears all around my strip to get it to stay against the sides. I don’t know if I’m terrible at kindergarten or actually awesome at it.

Once arts and crafts time was done, I mixed the cookie crumble with some butter and sugar, dumped most of it into the pan, tamped it down with a coffee mug, and tossed it in the oven. 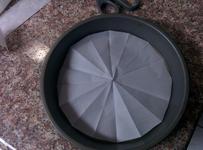 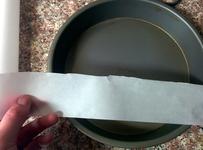 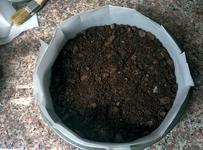 Now, for the filling. I melted the chocolate in the microwave first, so I could somehow add it later. 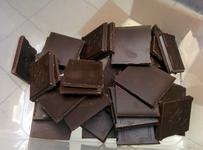 First I need some sour cream.

Okay, so. I have big measuring cups for measuring liquids. I have little measuring spoons for measuring powders and small amounts of liquid. Sour cream is… some kind of gelatinous goop. How am I supposed to measure this?

Alton Brown has a neat sour cream injector gizmo, but alas, I am not a renowned television chef. I had to fudge this a bit by spooning sour cream into a measuring spoon. At least it came out easily. 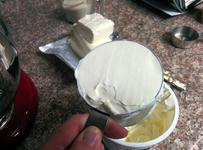 At last, I get to use the mixer! 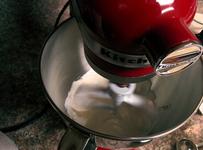 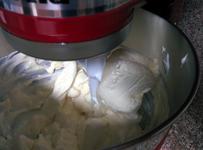 Meanwhile, I need to mix some heavy cream with vanilla extract and five eggs (sans some of the whites).

It is at this very moment that I discover we only have three eggs. I was fooled by the massive dozen-and-a-half egg carton in the fridge, and didn’t think to actually look inside it. Argh.

If I’ve learned anything from Cutthroat Kitchen, it’s that eggs are pretty important and nothing is really equivalent. I had to run to the store and get more. 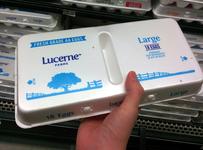 Okay, back to whatever I was doing. Mix that stuff, throw it in the mixer. 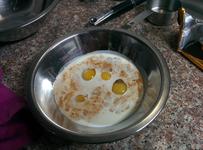 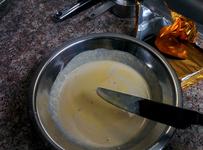 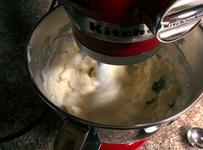 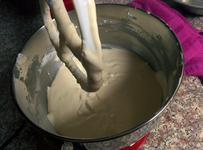 Anise, meanwhile, was supervising from atop the fridge behind me. He was particularly fascinated by the loud red thing.

So. I have some completed cheesecake batter (which is delicious, by the way). I also have some melted chocolate.

I guess there’s only one obvious course of action here. 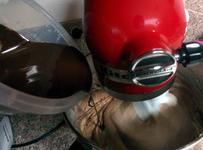 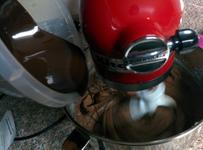 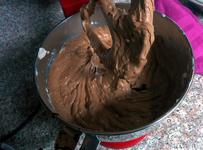 It’s also distinctly lumpy, but I don’t think this is related to the chocolate; Marl says they’re lumps of cream cheese, caused by adding the cream cheese while it was still fridge-cold.

Despite these curiosities, the batter is now absolutely delicious. Extremely chocolatey, but still with some tangy cheesecake undertones. It’s not exactly the Cheesecake Factory, but it’s pretty damn good.

The batter I have is now way too much to actually fit in the pan. It’s also kind of a mousse, rather than the thick liquid it’s supposed to be. What am I even making? Is this still cheesecake? 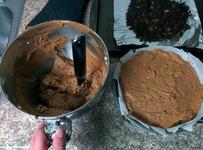 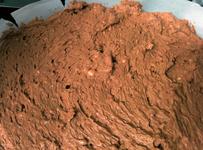 I guess I’ll bake it and see what happens.

A good chunk of the Good Eats episode is about how you ought to use a hot water bath to modulate the temperature or something. But I don’t have a Biggoron cake pan to put the water in. And our oven is kind of small. And I’m getting kind of tired at this point.

(I have a really bad habit of leaning over slightly when I’m standing at a counter. I’ve done it for as long as I can remember, and I’m not particularly tall, so it’s not that I can’t reach. I don’t know why I do it, and I usually don’t even notice, until I’ve been hunched over for an hour and suddenly my back is killing me.) 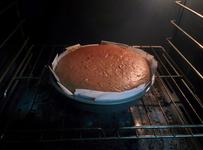 I left it in the fridge overnight, and…

I gave it a quick bath in some hot water, and it came out of the pan really easily, thank goodness.

I had some of the crust crumbs left over, intending to add them to the sides to complete the crust. They didn’t really stick at all, though, and I gave up trying to force them.

I’d put the cheesecake on a regular plate, for lack of a real cake platter. Cutting a cheesecake that has a big hole underneath it doesn’t go very neatly. Oops. 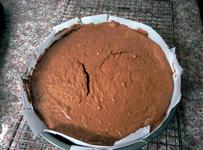 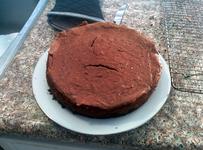 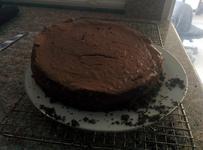 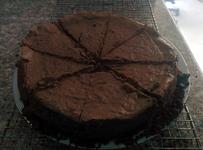 All told I made a bit of a mess of it. And yet… 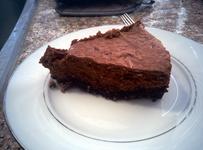 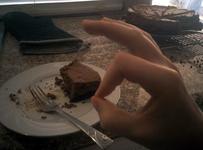 This is a fabulous cheesecake.

Oh, wait, one more thing. The Godiva recipe that I awkwardly spliced in asks for four bars of chocolate, but only three and a half of them are actually added to the batter; the other half a bar is reserved for garnishing the final cheesecake. So here’s some garnish. 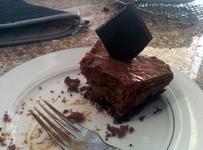 I still have half a cheesecake’s worth of batter and a bunch of crust crumbs, too! I guess I could make… mini chocolate cheesecakes in a muffin tray?