These are impressions, not reviews. I try to avoid major/ending spoilers, but big plot points do tend to leave impressions. 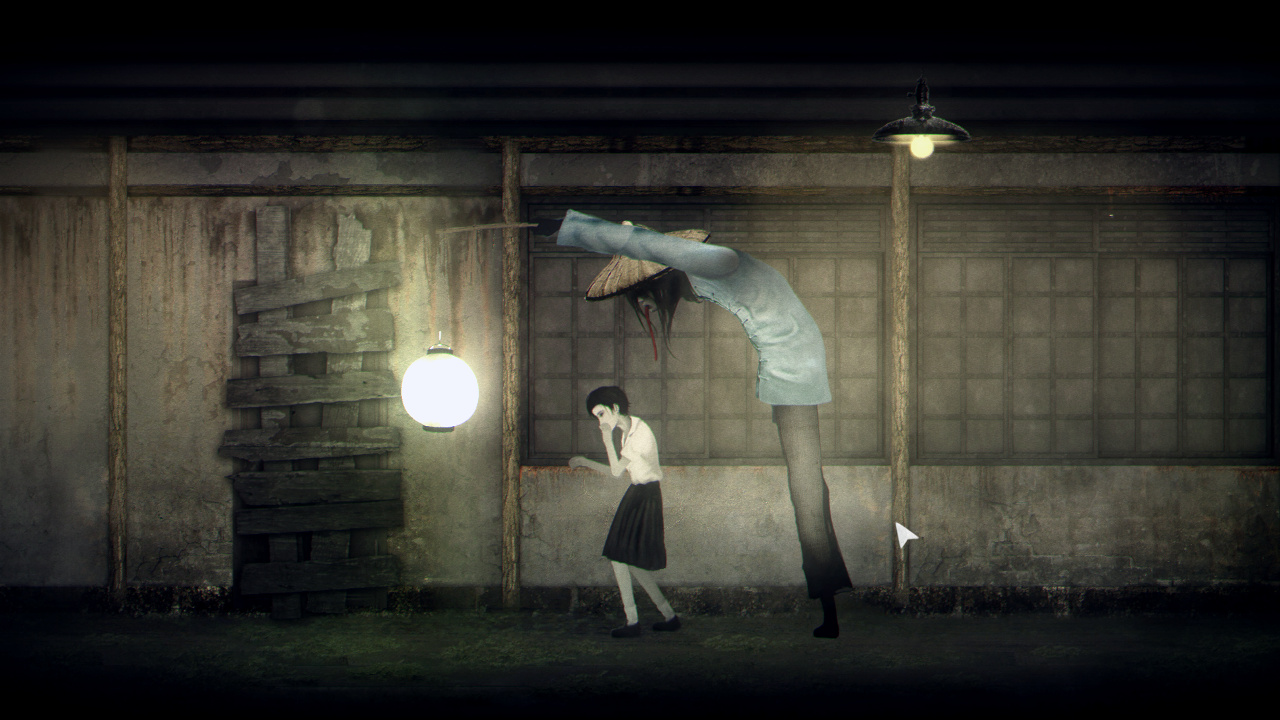 “Inventory horror” is a hell of a genre.

I think this one came from a Twitter thread where glip asked for indie horror recommendations. It’s apparently well-known enough to have a Wikipedia article, but I hadn’t heard of it before.

I love love love the aesthetic here. It’s obviously 2Dish from a side view (though there’s plenty of parallax in a lot of places), and it’s all done with… papercraft? I think of it as papercraft. Everything is built out of painted chunks that look like they were cut out of paper. It’s most obvious when watching the protagonist move around; her legs and skirt swivel as she walks.

Less obvious are the occasional places where tiny details repeat in the background because a paper cutout was reused. I don’t bring that up as a dig on the art; on the contrary, I really liked noticing that once or twice. It made the world feel like it was made with a tileset (albeit with very large chunky tiles), like it’s slightly artificial. I’m used to seeing sidescrollers made from tiles, of course, but the tiles are usually colorful and cartoony pixel art; big gritty full-color tiles are unusual and eerie.

And that’s a good thing in a horror game! Detention’s setting is already slightly unreal, and it’s made all the moreso by my Western perspective: it takes place in a Taiwanese school in the 60’s, a time when Taiwan was apparently under martial law. The Steam page tells you this, but I didn’t even know that much when we started playing, so I’d effectively been dropped somewhere on the globe and left to collect the details myself. Even figuring out we were in Taiwan (rather than mainland China) felt like an insight.

Thinking back, it was kind of a breath of fresh air. Games can be pretty heavy-handed about explaining the setting, but I never got that feeling from Detention. There’s more than enough context to get what’s going on, but there are no “stop and look at the camera while monologuing some exposition” moments. The developers are based in Taiwan, so it’s possible the setting is plenty familiar to them, and my perception of it is a complete accident. Either way, it certainly made an impact. Death of the author and whatnot, I suppose.

One thing in particular that stood out: none of the Chinese text in the environment is directly translated. The protagonist’s thoughts still give away what it says — “this is the nurse’s office” and the like — but that struck me as pretty different from simply repeating the text in English as though I were reading a sign in an RPG. The text is there, perfectly legible, but I can’t read it; I can only ask the protagonist to read it and offer her thoughts. It drives home that I’m experiencing the world through the eyes of the protagonist, who is their own person with their own impression of everything. Again, this is largely an emergent property of the game’s being designed in a culture that is not mine, but I’m left wondering how much thought went into this style of localization.

The game itself sees you wandering through a dark and twisted version of the protagonist’s school, collecting items and solving puzzles with them. There’s no direct combat, though some places feature a couple varieties of spirits called lingered which you have to carefully avoid. As the game progresses, the world starts to break down, alternating between increasingly abstract and increasingly concrete as we find out who the protagonist is and why she’s here.

The payoff is very personal and left a lasting impression… though as I look at the Wikipedia page now, it looks like the ending we got was the non-canon bad ending?! Well, hell. The bad ending is still great, then.

The whole game has a huge Silent Hill vibe, only without the combat and fog. Frankly, the genre might work better without combat; personal demons are more intimidating and meaningful when you can’t literally shoot them with a gun until they’re dead. 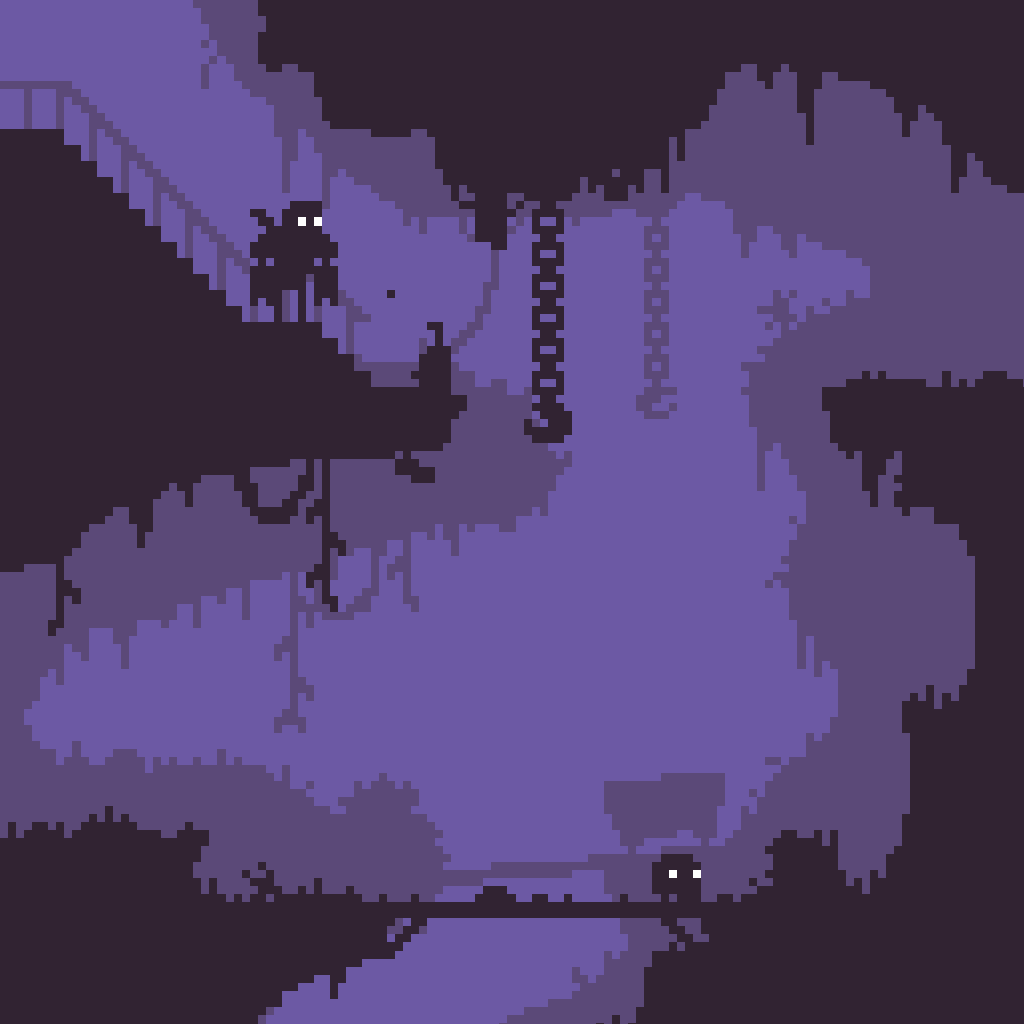 I found this because @itchio tweeted about it, and the phrase “atmospheric platform exploration game” is the second most beautiful sequence of words in the English language.

The first paragraph on the itch.io page tells you the setup. That paragraph also contains more text than the entire game. In short: there are five things, and you need to find them. You can walk, jump, and extend your arms straight up to lift yourself to the ceiling. That’s it. No enemies, no shooting, no NPCs (more or less).

The result is, indeed, an atmospheric platform exploration game. The foreground is entirely 1-bit pixel art, save for the occasional white pixel to indicate someone’s eyes, and the background is only a few shades of the same purple hue. The game becomes less about playing and more about just looking at the environmental detail, appreciating how much texture the game manages to squeeze out of chunky colorless pixels. The world is still alive, too, much moreso than most platformers; tiny critters appear here and there, doing some wandering of their own, completely oblivious to you.

The game is really short, but it… just… makes me happy. I’m happy that this can exist, that not only is it okay for someone to make a very compact and short game, but that the result can still resonate with me. Not everything needs to be a sprawling epic or ask me to dedicate hours of time. It takes a few tiny ideas, runs with them, does what it came to do, and ends there. I love games like this.

That sounds silly to write out, but it’s been hard to get into my head! I do like experimenting, but I also feel compelled to reach for the grandiose, and grandiose experiment sounds more like mad science than creative exploration. For whatever reason, Viatoree convinced me that it’s okay to do a small thing, in a way that no other jam game has. It was probably the catalyst that led me to make Roguelike Simulator, and I thank it for that.

Unfortunately, we collected four of the five macguffins before hitting upon on a puzzle we couldn’t make heads or tails of. After about ten minutes of fruitless searching, I decided to abandon this one unfinished, rather than bore my couch partner to tears. Maybe I’ll go take another stab at it after I post this. 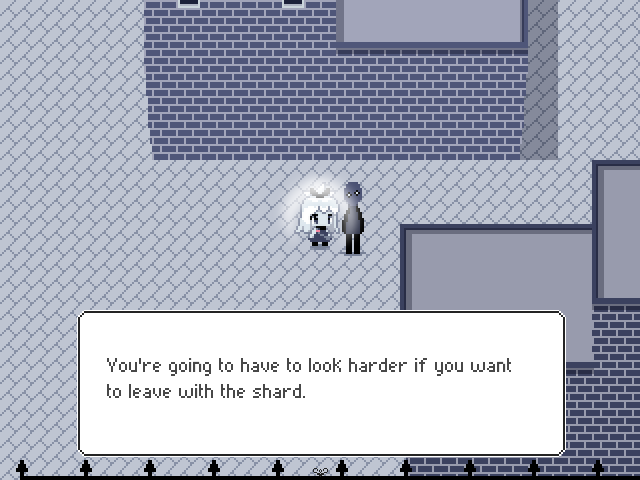 Paletta, another RPG Maker work, won second place in the month-long Indie Game Maker Contest 2017. Nice! Apparently MOOP came in fourth in the same jam; also nice! I guess that’s why both of them ended up on the itch front page.

The game is set in a world drained of color, and you have to go restore it. Each land contains one lost color, and each color gives you a corresponding spell, which is generally used for some light puzzle-solving in further lands. It’s a very cute and light-hearted game, and it actually does an impressive job of obscuring its RPG Maker roots.

The world feels a little small to me, despite having fairly spacious maps. The progression is pretty linear: you enter one land, talk to a small handful of NPCs, solve the one puzzle, get the color, and move on. I think all the areas were continuously connected, too, which may have thrown me off a bit — these areas are described as though they were vast regions, but they’re all a hundred feet wide and nestled right next to each other.

I love playing with color as a concept, and I wish the game had run further with it somehow. Rescuing a color does add some color back to the world, but at times it seemed like the color that reappeared was somewhat arbitrary? It’s not like you rescue green and now all the green is back. Thinking back on it now, I wonder if each rescued color actually changed a fixed set of sprites from gray to colorized? But it’s been a month (oops) and now I’m not sure.

I’m not trying to pick on the authors for the brevity of their jam game and also first game they’ve ever finished. I enjoyed playing it and found it plenty charming! It just happens that this time, what left the biggest impression on me was a nebulous feeling that something was missing. I think that’s still plenty important to ponder.