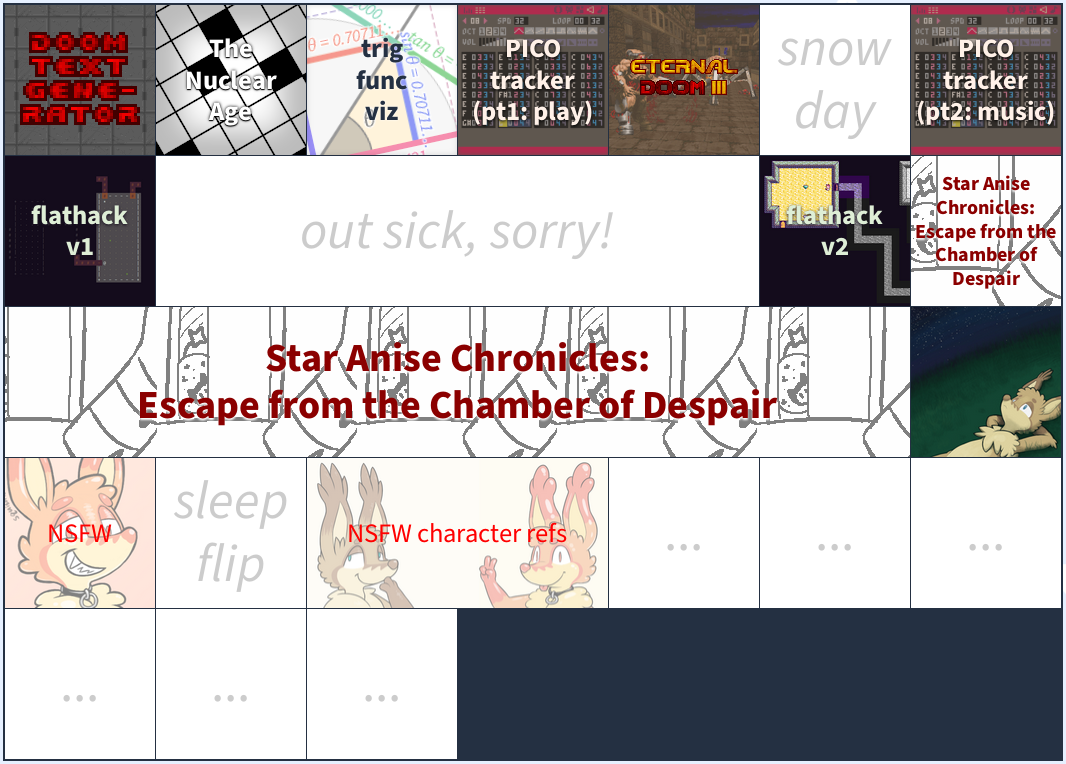 For December, I had the absolutely ludicrous idea to do an advent calendar, whereupon I would make and release a thing every day until Christmas.

It didn’t go quite as planned! But some pretty good stuff still came out of it.

Day 1: I started out well enough with the Doom text generator (and accompanying release post), which does something simple that I’ve wanted for a long time but never seen anywhere: generate text using the Doom font. Most of the effort here was just in hunting down the fonts and figuring out how they worked; the rest was gluing them together with the canvas API. It could be improved further, but it’s pretty solid and useful as-is!

Day 2: I tried another thing I’d always wanted: making a crossword! (Solve interactively on squares.io!) I didn’t expect it to take all day, but it did, and even then I found a typo that I didn’t have time to fix, and I had to rush with the clues. All in all, an entertaining but way too difficult first attempt. I’d love to try doing this more, though.

Day 3: I’ve made a couple SVG visualizations before — most notably in my post on Perlin noise — and decided to take another crack at it. The result was a visualization of all six modern trig functions, showing the relationships between them in two different ways. I’m pretty happy with how this turned out, and delighted that I learned some relationships I didn’t know about before, either! I do wish I’d drawn some of the similar triangles to make the relationships more explicit, but I ran out of time — just orienting the text correctly took ages, especially since a lot of it needed different placement in all four quadrants. I vaguely intended to get around to doing a couple more of these, but it didn’t end up happening.

Days 4 and 7: I love the PICO-8‘s built-in tracker, which makes way more sense to me than any “real” tracker, and set out to replicate it for the web. The result is PICOtracker! Unfortunately, this one didn’t get fully finished (yet) — it can play back sounds and music from the hardcoded Under Construction cart, but doesn’t support editing yet. Most of my time went to figuring out the Web Audio API, figuring out what the knobs in the PICO-8 tracker actually do (and shoutout to picolove for acting as source code reference), and figuring out how to weld the two together. I definitely want to revisit this in the near future!

Day 5: I’d been recently streaming Eternal Doom III and was almost done, and I keep being really lazy about putting Doom streams on YouTube, so I finished up the game (which took far, far longer than I expected) and posted the whole thing as a playlist. It spans like 24 hours. Good if you, uh, just want some Doom noise to listen to in the background.

Day 6: I’d expected Eternal Doom to be a quick day so I could have a break, and it was not. So I took an explicit day off.

Days 8 and 13: I made flathack, a web roguelike with only one floor! The idea came from having played NetHack a great many times, and having seen the first floor much more than any other part of the dungeon — so why not make that the whole game? It needs a lot more work, but I’m happy to have finally published a roguelike, and I think it already serves its intended purpose at least a little bit: it’s a cute little timewaster that doesn’t keep killing you.

Days 14–20: Fresh off of making flathack in only two days, I got a bit too big for my britches and decided to try writing an interactive fiction game. In one day. Spoilers: it took more than one day. But I think the result is pretty charming: Star Anise Chronicles: Escape from the Chamber of Despair, a game about being a cat and causing wanton destruction, and also the first Star Anise Chronicles game to actually be published. A good chunk of the time was spent just drawing illustrations for it, which weren’t strictly necessary, but they add a lot to the game and they did get me back in an art mood.

Day 21: I feel like I’ve been scared of color for a long time, and that’s no good, so I drew and colored something.

Day 23: Did not exist, due to becoming nocturnal.

Day 24–28: I started a big reference of a bunch of my Flora characters way back in November 2018, but I tried to paint it when I didn’t know what I wanted in a painting style, and eventually I gave up. Flat colors are better for references anyway, so I tried again, and this time I finished! I’m really happy with how it came out — I feel like I’m finally starting to get the hang of art, maybe, just as I hit five years of trying. Again, it’s wildly NSFW, but the link is on the calendar.

All told, I didn’t quite end up with 25 distinct things, but I did make some interesting stuff — some of which I’d been thinking about for a long time — and I’ll call that a success.

I’d love to get flathack to the point that it’s worth playing repeatedly, make more crosswords, and finish PICOtracker — but those will have to wait, since my GAMES MADE QUICK??? FOUR jam is coming up in a few days!

And speaking of which, I need to put a bunch of this stuff on Itch!