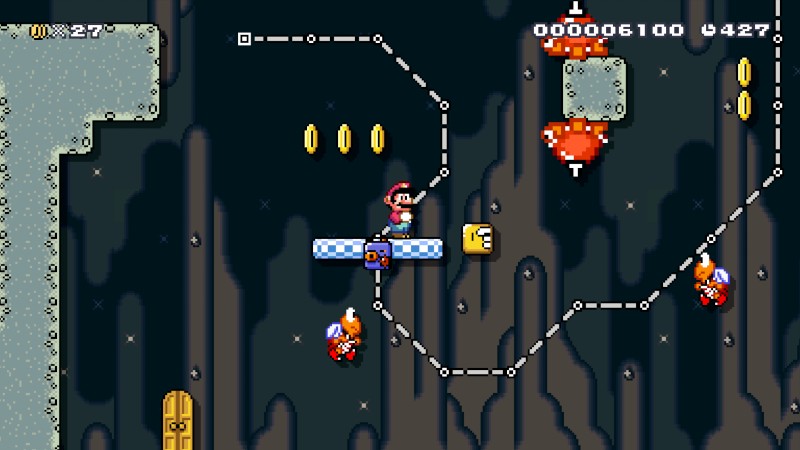 Vanilla Dome has a cool aesthetic and an unusual style — you navigate up and down through caverns, rather than mostly to the right as is common in Mario. I tried to capture some of that here.

This was the first time I tried to do any real narrative things with the detailing in the level. Not some grand coherent plot; just little hints that life is happening here and it’s not necessarily centered around you. I love that in games.

There are also quite a few branching paths, which is a little difficult to cram into Mario Maker where the world can only be two screens tall. Jamming in a lot of secrets made it even harder, but I managed. See if you can find them all! No backtracking required, I think.

There’s a boss battle at the end, though the solution is unfortunately not as obvious as I’d hoped. A surprisingly tricky problem is finding ways to force the player to actually beat the boss, rather than scurry past it. (I’m not sure anyone has picked up on what the boss is, either.) It’s a real shame, because it feels clumsily tacked onto the end of what is otherwise a pretty nice level.

Overall I think this could use a little bit more cohesion, but I’m pretty happy with it.