I regret doing so.

Here are some thoughts. Trans readers, brace yourselves, especially if you didn’t read the original.

Some help came from Andrew James Carter’s response thread, which has many more citations but feels less compelling to a general audience to me. 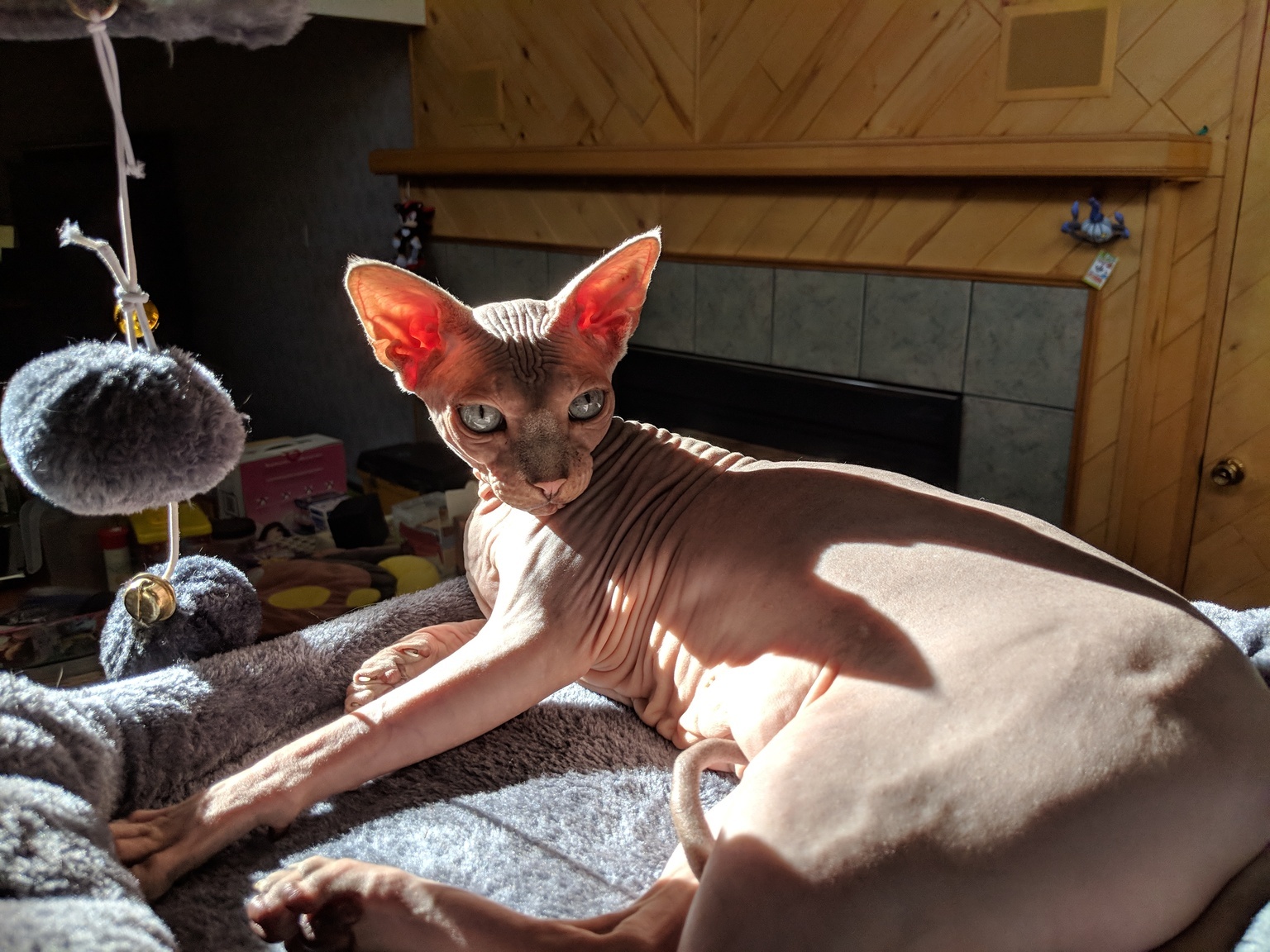 I did not expect my return to writing to be like this.

He is survived by Pearl, his lovely niece; Anise, his best friend and sparring partner; Cheeseball, his wrestling protégé; and Napoleon, his oldest and dearest friend.

This has been a surreal and difficult year, but everything turned out much better in the end.

A year strongly defined by mixed success! Also, a lot of video games.

This month, IndustrialRobot has generously donated in order to ask:

How do you go about learning about yourself? Has your view of yourself changed recently? How did you handle it?

Whoof. That’s incredibly abstract and open-ended — there’s a lot I could say, but most of it is hard to turn into words.

Wow! What an incredible fucking year. I’ve never done so much in my life.

A year ago today was my last day working a tech job.

Eevee grew to level 29! Like a week and a half ago.

Wow, what a year.

This Friday, June 12, will be my last day at Yelp.

I don’t intend to look for another tech job.

Or another job at all.

I don’t know what to say about 2014, really, so let’s just start typing and see what happens.

I feel like I’ve grown a lot, but I can’t quite explain how. I tried a lot of things I haven’t really tried before, and they’re all informing how I think about things now. I don’t feel like I have a lot to show for all of them, though. Hm.

For once, I’m also considering what I would like to do this coming year.

Only five things in a year. How hard can it be?

Another year gone by. I don’t think I even did one of these last year, but let me think about what I did while I was 26.

Surely I’m forgetting something; that doesn’t sound like a lot. Okay yeah obviously buying a house is kind of significant, but it only ate a month. And I guess Styx’s declining health ate another month, during which I was largely a zombie. And pyScss was the only significant project I worked on for quite a while… hmm.

Seems like 2013 was a dreary void of a year for a lot of people. Even a millenium can’t escape being awkward and useless when it’s 13.

I can hardly believe I posted a bunch of photos of Styx earlier this year.

Three months later to the day, I put him to sleep.

I suppose this is his obituary.

In early December 2011, I bought a digital SLR.

You can see where this is going.

Styx is a Sphynx, one of the hairless breeds. (Wow! Just like Dr. Evil’s cat! I have never heard that before! You are so clever!) Mel already had a sphynx, Twigs, and he pretty much sold me on Sphynxes being the best cats ever. Though I think Styx might have more of a Devon Rex personality and body shape, based on Mel’s cat breed book.

I’ve accumulated a mountain of cat photos, but only a few of them have seen the light of day. Let’s fix that! And please do pardon my shoddy attempts at composition and framing and white-balance and post-processing and otherwise trying to take photography more seriously than Instagram.

Look at this sweet guy Mel got custom-made for my birthday. There’s context here, but it’s big and complicated, so let’s just say it’s a life-size stained-glass Chandelure and is totally fuckin rad. (That’s an official life-size Eevee, for scale.)

Having a bit of trouble finding a place to keep a three-foot-tall plush, though. He’s got a hook near the top of his flame, but hanging him from the ceiling doesn’t really help since he hangs down to chest level. 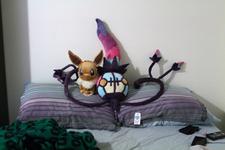 While I’m at it, my collection expanded considerably after our two-week vacation in Japan, and I finally got around to adding a new shelf to hold them all. So, here’s what my room looks like now… 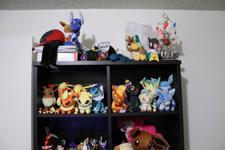 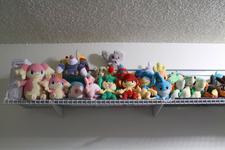 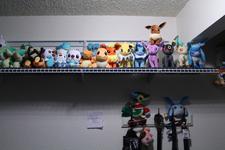 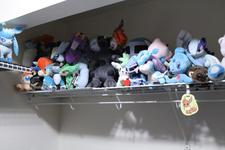 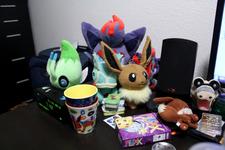 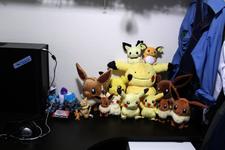 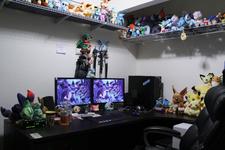 I’m not too proud to admit that I might have a problem: where can I possibly fit more shelves? 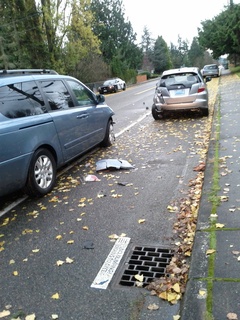 So someone hit my car last week.

It was parked on the curb, right in front of my house. (We have four cars and a packed garage, so.) I heard a super loud smack, but thought someone had dropped a large appliance on the sidewalk until Mel appeared in my doorway with someone hit your car.

Outside I scurried in pajamas and slippers (working from home is awesome) and I beheld the scene you see inset. The driver was very apologetic, and luckily unharmed. She’d been fiddling with something on her dashboard and wasn’t even looking at the road, so she hit my car at full speed. The photo is framed as it is because my car had been parked with its rear wheel on that grate, and with the parking brake on. That’s how far she knocked it. (Speed limit on this street is 25, by the way.)

I felt kinda bad for her, but at the same time, that this even happened is terrifying. I don’t know if a human being would have survived the same impact. She said she’s “normally such a safe driver”—I guess she’s only a dangerous driver sometimes, then, and it turns out those are the times when you hit things.

Called 911; couple police cars came to direct traffic around her and file an accident report, and a flatbed tow truck took her car off. I had to leave my car “parked” in front of a fire hydrant overnight, because the rear axle was bent so much that it doesn’t move at all.

My car was towed to a local shop the day after; they called me back earlier this week with an estimate around $7400. The driver’s insurance is paying for absolutely everything without question, though, so I shouldn’t be out a dime over this. I have a rental in the meantime.

This is actually the second time this has happened; early this year I was street-parked on the other side of the street, and I awoke to find a conspicuous dent in the driver’s side door. And when I say “dent”, I mean it spanned the bottom of the door up to the window; looked like a shopping cart had hit it at an angle while going 40. I’d only slept for a few hours the night before, and Mel had been awake through the night, but neither of us heard or saw anything. Don’t know what happened or who did it. I thought it would be a simple fix, but the shop had to replace the entire door, I had to pay a few hundred deductible, and my insurance went up. Super.

I’ve never hit anything, never gotten a ticket, never even been pulled over. I live in a fairly sleepy town, not on a major road. And in two years my car has been hit twice, while parked at home. I’m just gonna start parking on the lawn.

Below are some photos of my poor darling car. Consider this a test of this fancybox plugin gallery plugin.

This is a thing I got yesterday. Not 24 hours ago, even.

Mel had it done last December and started dropping hints that I should also get it done pretty much that day. I stalled and dawdled forever, but I’ve been experiencing a lot of eye strain lately and was due for an eye exam anyway, so I finally made an appointment for Wednesday.

Not that Mel was continually bugging me to do it or anything, but when faced with the prospect of doing something terrifying, spinning it to myself as something someone else wants doing is a convenient brain hack.

Yes, terrifying. You see, I don’t like things i my eyes. I don’t like water in my eyes. I had never opened my eyes underwater until a couple months ago, and it still feels like a superpower to me. If I get an eyelash in my eye, I have to find a mirror and manually guide it out because it bugs me so much. And now I was facing a medical procedure that involved shining a laser into my eyes. A laser! You know where you’re supposed to shine a laser? Anywhere except into your eyes.

Okay, this story seems to have gotten a little off-track. Let’s rewind.

Ho jeez what have I even done this year.

I guess I started a bad habit of writing big long posts About Things, and then blogging became this self-imposed chore, and then I didn’t do a lot of it. Oops. I’ll make a deliberate effort to write shorter things when they come to mind. (I also have half a dozen half-finished posts not committed, which by my count should equal three whole posts.)

Lately I’ve been drowning in an (even worse) inability to do things. Something dislodged all the cool progress I made at the end of last year and I don’t feel like I’m getting much of anything done. Numerous conversations with mel, strangely-relevant blog posts I stumbled upon purely by accident, and brilliant self-reflection are starting to help.

I am now, officially, as literate as a native Japanese two-year-old. Almost. Maybe. 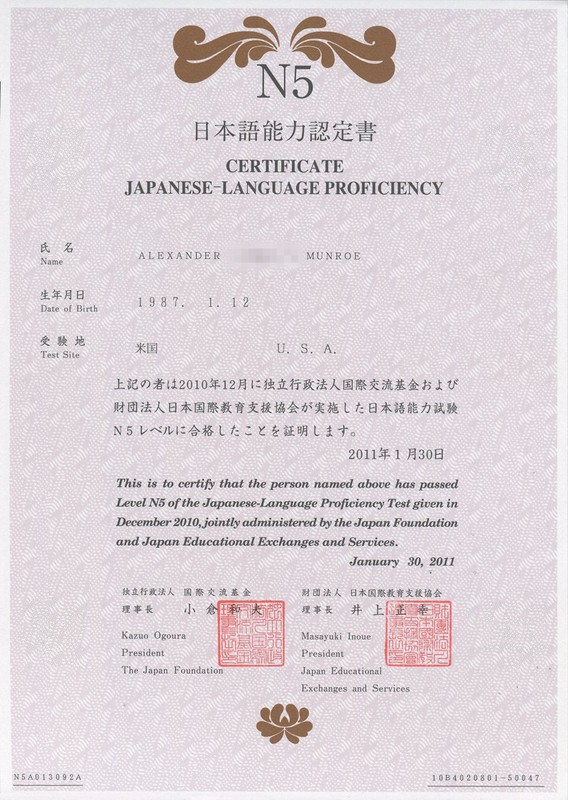 I actually meant to condense all the grammar I know down to bullet points that make sense to me, and post it before I took the test. I kinda never did that. Oops! Maybe some other time.

I haven’t really studied in the past two months, either; time to get back into that. I picked up a surprising number of phrases from watching FMA, so that’s a good sign.